JoJo LaRiccia is a filmmaker and photographer based in Boston, MA. 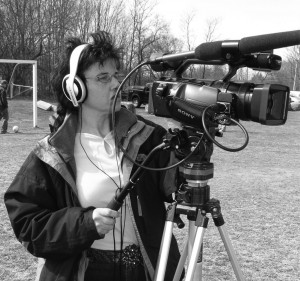 JoJo LaRiccia first got into film at none other than the Massachusetts Institute of
Technology, where she earned an A in her Film Photography class. Unfortunately,
she was unable to receive credit because she was, in fact, 11 years old. From there,
JoJo fell in love with film and photography, going on to attend Berklee College of
Music in 1976 as a singer and composition major and making her first music video
there (“Change Your Mind,” which was a runner-up on MTV’s Basement Tapes in
1986).

LaRiccia then launched her film career with the three-time Emmy-nominated
live action children’s program, JoJo’s DreamCart as producer, host, singer, and
songwriter in 2002 and made it her passion over the years to learn the language of
the film industry.

Jojo is always working on several different projects. To date, she is one of the
producers for the live TV show, Dead Air Live (DAL) with the Somerville Producer’s
Group at SCATV, and has been an archivist for DAL, the longest running live TV show
in the United States of America.

LaRiccia describes herself as a filmmaker but is unafraid to take on any challenge
presented to her. Her motto: “Bring it on!”